Over 43% of the internet is consumed by Netflix, Google, Amazon, Facebook, Microsoft, and Apple: Global Internet Phenomena Spotlight

We often talk about the big brands on the internet and their dominance. Last year, I did a spotlight on Asia that showed that Google was over 40% of the connections in Asia, and in the mobile report, Facebook was over 20% of all mobile traffic. I decided to dig through the Phenomena data to discover how the brands' library of applications and content would stack up against each other.

The internet brand giants are not always just a single "thing" anymore. For each of these brands, there is a collection of content and applications that combine to build the overall brand. I took all of the statistically significant contributors from each brand (essentially anything that contributed over .01% of connections or volume) and decided to compare their impact on internet traffic.

When combined, these brands took up over 43% of all traffic volume on the internet:

The details are interesting. Overall, Google edged out Netflix as the top consumer of bandwidth on the internet (as well as upstream) and dominated in the percentage of connections. Unsurprisingly, Netflix was the single largest consumer of traffic downstream, but Google was not far behind. 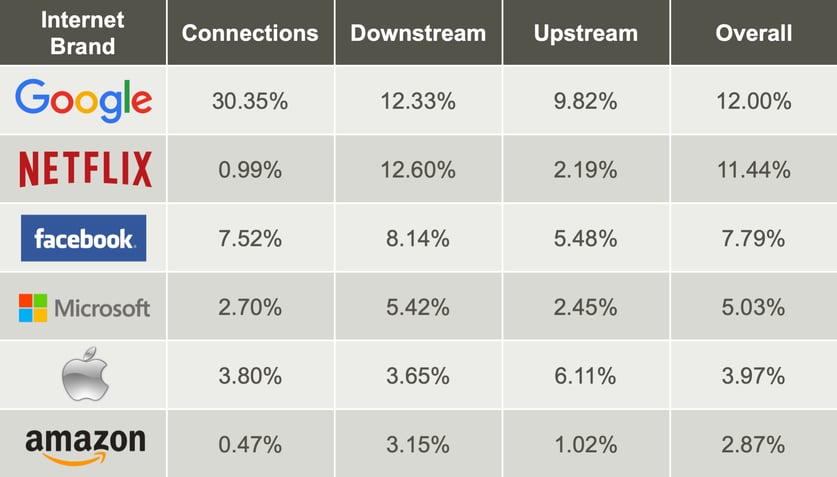 If you needed confirmation that brands can build synergies and expand their business, this is a good proof point for the success of these brands. The obvious outlier in this case is Netflix, which does one thing and does it exceedingly well, albeit at very high volume. With new streaming services coming out from Facebook and Apple, with 4K and live streaming taking hold, these numbers might climb even higher next year.

The data this year is providing some very interesting confirmation of things that we have suspected, and I will keep digging to see what else I can find for next week's blogs and the final report that we will release on September 10th. If you have some questions or ideas, send them to phenomena@sandvine.com.