There was a lot of interest in my blog on Pokemon last week, and we kept watching over the weekend to see if the craze would continue. I am sure that most people saw the craziness from Central Park when a rare Pokemon showed up, and I watched my youngest son take walks around our neighborhood to catch Pokemon (and he was not the only person I saw walking around in augmented reality around my house) all weekend long. T-Mobile has even announced that they plan a promotion to offer free Pokemon data for a full year.

Pokemon Go is definitely having an effect on mobile broadband networks, and I expect the implications to start new projects inside of mobile operators to adapt their network to to hot applications like Pokemon Go. As a reminder, these statistics cover about 2M mobile subscribers in Europe, so these numbers would be huge on larger networks.

In the graph below, each dot represents a single cell site, the x-axis shows the total number of minutes Pokemon Go ran on the cell site, and the y-axis shows how many subscribers played Pokemon Go on that cell site. This is a significant number, and I can bet that two weeks ago monitoring these cell sites for capacity expansion was not on the radar screen of the mobile operator. 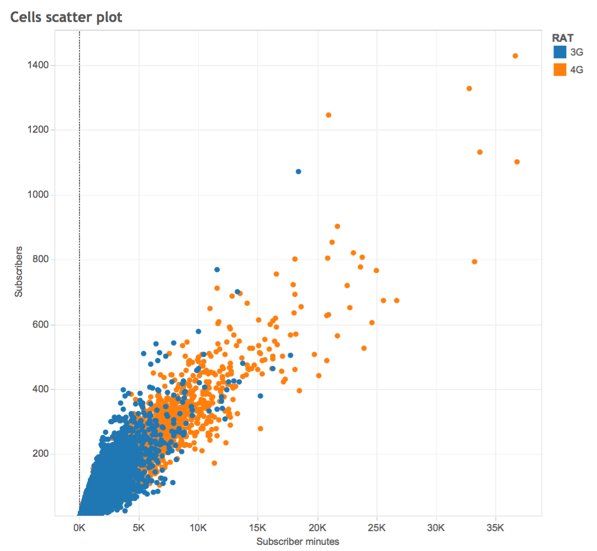 As you can see, the sites in the upper right quadrant represent a big multiplier of subscribers that stay on playing Pokemon longer than the bottom right quadrant (up to 7x). The outlier cells in this example line up with known Pokestops and gyms, and signify that as Pokemon Go starts leveraging sponsorship for these premium locations, mobile operators need to know where these are and may need to adjust capacity planning to account for this.

This is not a surprise, but after all the press on the attacks, we thought it would be good to visualize how a DDOS attack affects latency, packet loss, and subscriber engagement. The graph below lines up Latency (External RTT), Packet Loss (Retransmissions), and Active Pokemon Go subscribers (Subscribers).

As you can see, the attacks caused almost a 2x increase in latency, almost 60% packet loss at peak, and caused subscriber engagement to dip to zero at their peak. Although Pokemon is not quite a real-time game where a second of downtime can result in players actually losing money, ongoing quality issues can cause erosion in the subscriber base. Popular games will continue to be a target for DDOS blackmail, and if the servers that host them and the networks that they run on cannot adapt to the attacks, they can cause severe financial consequences to the companies. 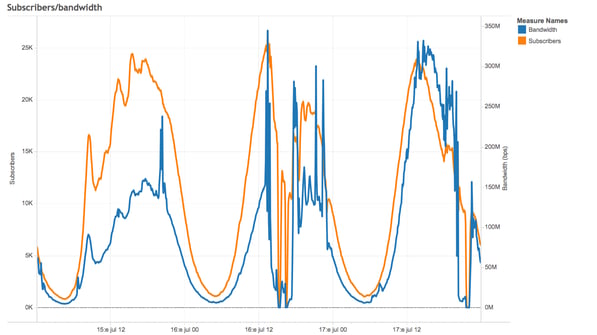 These attacks were targeted, and did not affect users that were not playing Pokemon Go, but I bet that customer care calls happened as a result of this – and the operator needed a dashboard that they can consult in real-time to determine if Pokemon Go was having an issue on their network – which requires application awareness connected to network quality awareness.

Our initial survey showed 7% of the subscribers accessed Pokemon Go during the 3 hour period we looked at before. Over the weekend, that overall engagement number was almost 12%! As many people have pointed out, Pokemon Go does not use much data (our data shows ~8MB/hour), so the volume is not the way to look at engagement for Pokemon (which is why operators fear Netflix!). Let’s first look at what percentage of subscribers accessed top applications during the weekend.

It is important to note that although the Facebook engagement time looks twice as high, all of the other applications on this list function differently from Pokemon Go. Pokemon Go will only “refresh” when the user is moving locations to check if there are Pokemon nearby. Facebook, Snapchat and Twitter all update in the background on your mobile device constantly with little update checks (which registers as usage time in our metrics). Most reports show that Pokemon has higher application engagement times than any of the applications, and this measurement supports that metric.

We identified over 170 different mobile device vendors representing almost 1500 different mobile devices that accessed Pokemon Go during the weekend on this network for an average of ~65 minutes per day. Here are some of the biggest device vendors and individual devices that accessed Pokemon Go on this network: 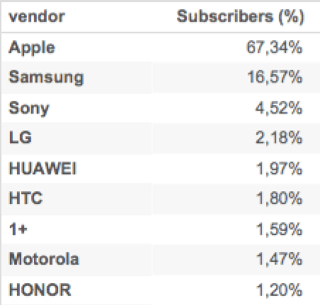 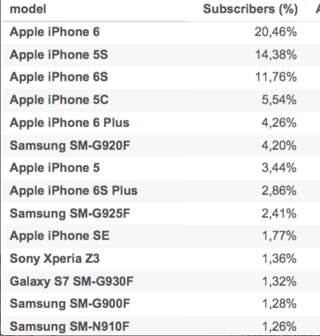 As expected Apple and Samsung are the leading device manufacturers, but it is not just mobile phones that show up on the list – mobile hotspots, tablets, and even PCs show up in the device list (likely tethering to other devices, but could even be using mobile emulators).

We’ll keep watching this as it develops, there are more interesting facts that seem to pop out every time we look at the data! If you have any questions....