Google Stadia: Is it an Internet Phenomena?

The early answer is, not YET — let's see what happens after January when it becomes more widely available.

I am a Google Stadia Founder's edition purchaser (for research purposes, I had no choice — at least, that is my story and I am sticking to it!). I've finally been home long enough to try out Stadia (again, for research purposes) and have a chance to take an initial look at the data we're seeing on customer networks. First, let's look at the customer angle, then I'll discuss my observations and predictions.

So far, Stadia is barely a blip on our customer networks. The Google Play store shows over 100k downloads and has over 3,300 reviews (with a 4.6 rating), but Google has not announced specific performance numbers of initial sales. I also did a quick look at the regions where Stadia is available and it hasn't made much of an impact on gaming numbers so far.

The biggest user stat I saw was on a US fixed line network, where the two largest consumers of Stadia actually played for anywhere from two to six hours in a single day (depending on whether they streamed at 10Mbps, 35Mbps, or something in the middle).

The most interesting one is a European mobile network, where it looks like one or two users tried to play for a short time, and several others interacted with the application (possibly authorization of their controllers). The experience didn't seem to be good enough (no surprise since the throughput was below the minimum recommended 10Mbps). 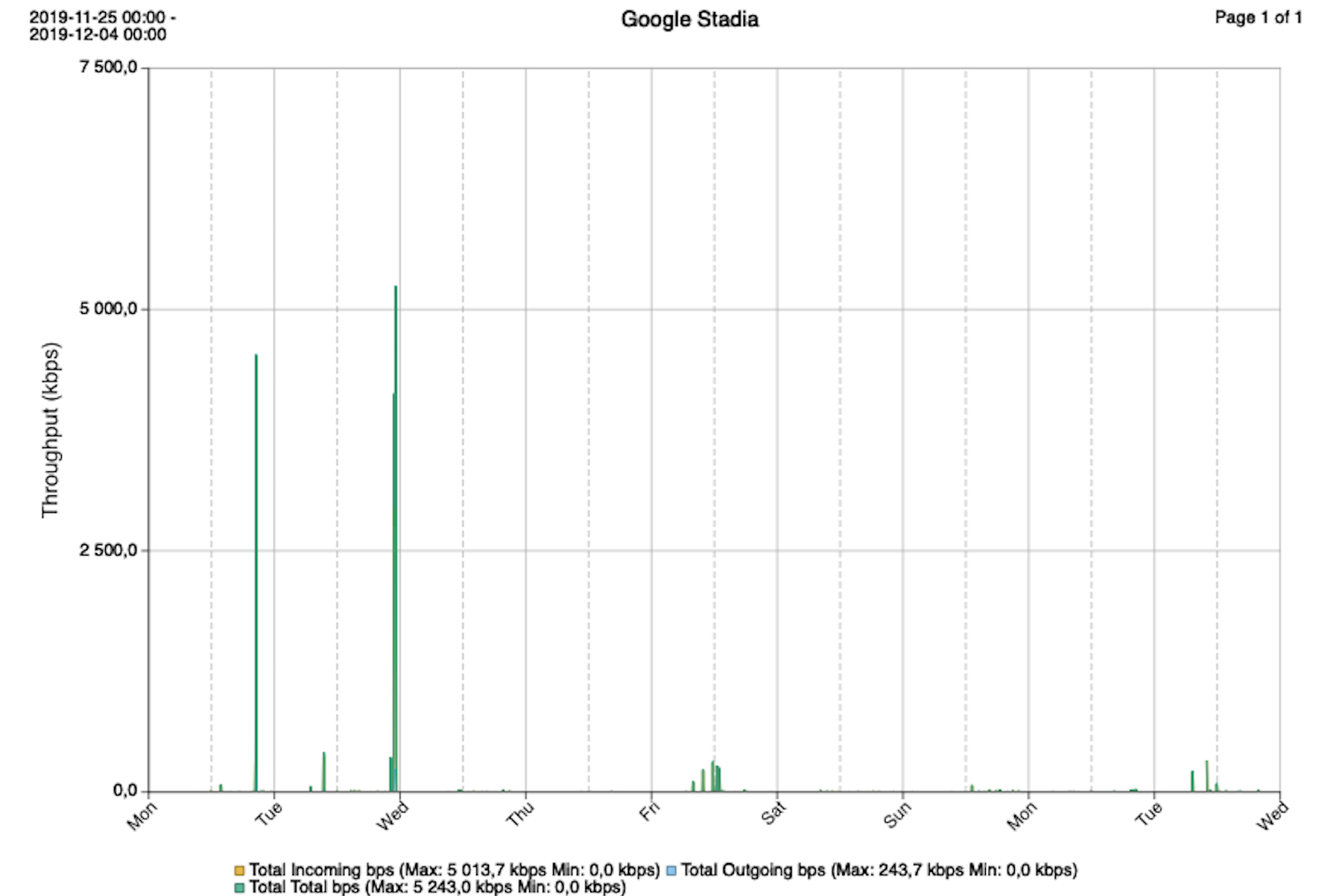 On another network, we saw more users take advantage of Stadia, but even in this case the 450Mbps peak is less than  1% of overall network usage, and could be as few as 12-15 users (which is actually scary if you really think about it!). 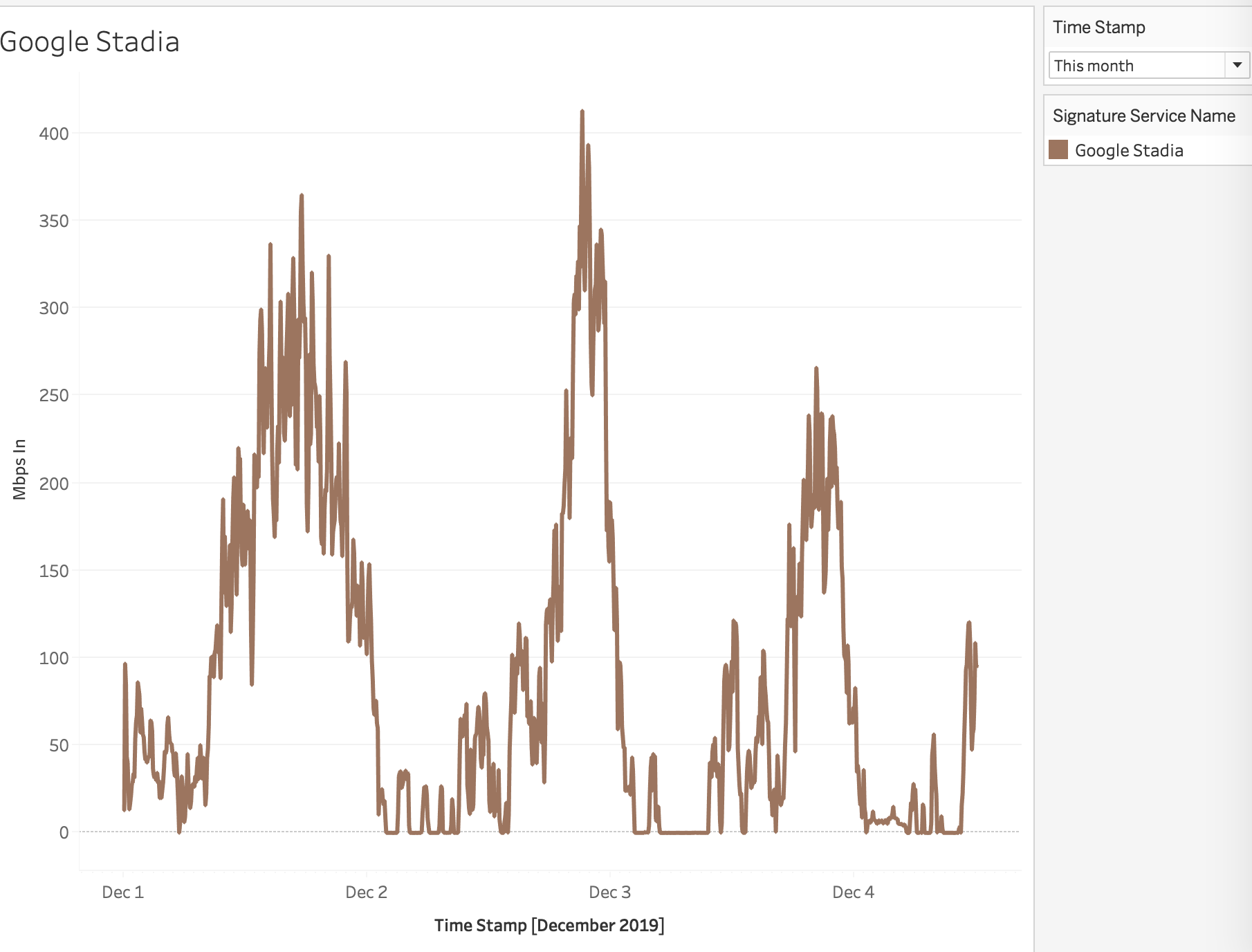 As for my experience, I saw usage peaks over 50Mbps (using Google WiFi stats in this case) from the Stadia service using my WiFi connected controller and Chromecast. In general, the gaming experience was fine — not terribly different from what I experience playing on my PS4. I had several experiences of lag while playing Destiny 2, which resulted in "teleports" during the game — annoying, but not fatal. Serious FPS gamers are likely to not be happy with even a single lag event. Interestingly enough, since there was plenty of downstream bandwidth, my suspicion is that this is an upstream latency issue more than a downstream one (where your directional movement is an upstream problem, not a downstream).

Here is an interesting comparison: The left image is Google Stadia playing Football Manager 2020, clocking in at  53Mbps for a traditionally offline game. As the middle image shows, the same game played on my iPad barely registers at all on the throughput meter. The final image is Rocket League on the PS4, my personal favorite game for a comparison of a traditional console game. 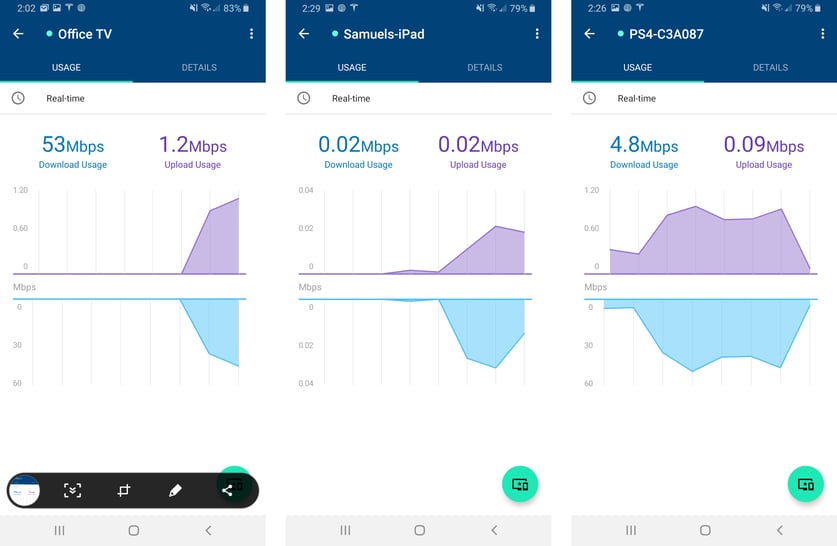 So far, Stadia isn't crushing networks as it has the potential to. Google is rolling the service out slowly, as they recognize that it will challenge the ability of networks to deliver a good experience for users. Once the service becomes generally  available, and the game selection improves...