"With people working from home, VPN usage will increase." Another far out prediction we made when the work from home mandates began to spread worldwide. Security is so critical to corporate IT strategies, and most companies of any size mandate the use of a VPN to access corporate resources. As content and more corporate services move into the cloud, the use of VPNs may decrease (but not the use of encryption for authentication and privacy — it will just move to HTTP/TLS), but will likely never go away.

So, this doesn't come as a surprise since we are now three months into the stay-at-home phase and we did in fact see pretty significant growth in VPN usage during the global stay-at-home orders. In fact, outside of video, gaming, and social sharing (more on that in the full COVID-19 Spotlight Report), VPNs were the only other application category to grow their traffic share (by +0.1% to 2.56% of total traffic) during the report period, indicating that the growth rate for VPNs was above the 40% global traffic growth rate (BIG NUMBER, I KNOW!), and gained ground despite the massive growth in other traffic types. Below is a consumption over time chart that shows the growth in VPN usage from February 1 to April 19. 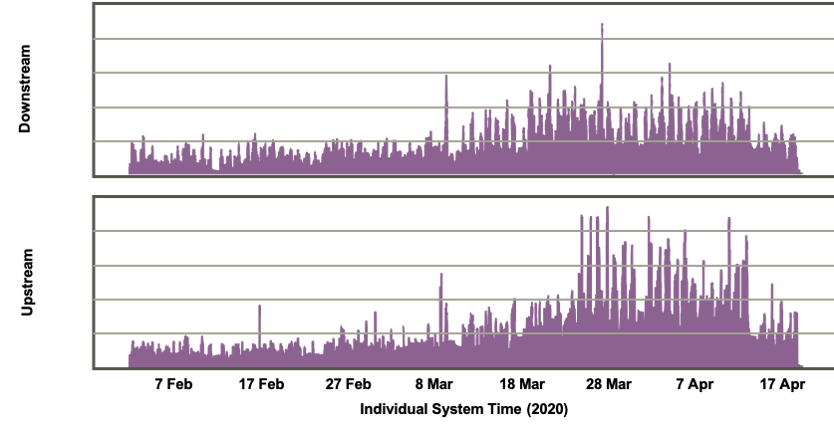 Downstream growth was driven by work hour usage (characterized by the spiky daily usage) and was around 4x normal. On the upstream, growth was more like 8x normal during peak usage times, clearly reflecting work VPN usage.

It is important to note that this VPN category is made up of two different VPN types:

The majority of the traffic represented in this graph (>70%) represents business VPN traffic, ensuring that the results are not skewed by consumers participating in file sharing networks to download pirated content during the shutdown. File sharing, although it grew in volume like all traffic, was down as an overall percentage of traffic during the shutdown as a result of the huge growth in other traffic types.

Stay tuned for a big reveal tomorrow on the #1 application during the COVID-19 Phenomena Report period. It might not be what you think it is (depending on your biases)!