Today marks the release of the 2019 Mobile Internet Phenomena Report. There are a number of highlights in this edition of the report, which is exclusively focused on mobile networks (where the Global Report covered all traffic).

I got a lot of comments after the release from mobile operators on how the report did not accurately reflect their network, and they were right. Mobile networks consume their bandwidth very differently than fixed, and the sheer volume of fixed traffic on a large network dwarfs the consumption on just about any mobile network. So this report (timed to pair with Mobile World Congress in Barcelona), paints a much clearer picture of mobile networks, and will be a good start for operators planning their 5G network deployments of the future. 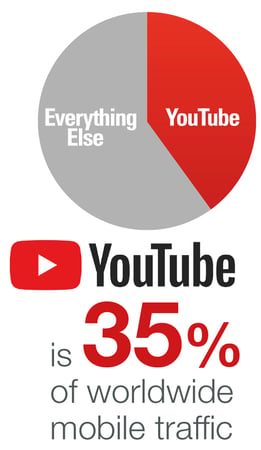 The biggest takeaway from the report is the sheer dominance of YouTube on mobile networks. YouTube was 35% of all mobile traffic on the networks that we included in the report worldwide. 35%! If you were impressed by Netflix's 15% worldwide share overall, the fact that YouTube has 35% of all mobile (downstream+upstream) is even more impressive, especially with the gains that Facebook Video and TikTok have made over the past year or so.

YouTube was #1 in every single region in the report (North America, Latin America, Asia Pacific, Europe, and the Middle East). It was #1 downstream in each region (37% overall), and in the top 10 on the upstream (10% overall) in each region. As in the Global Report, the Mobile Report reports on total volume rather than peak hour usage, and in some networks the peak usage is even far larger.

If you are interested in the Mobile Internet Phenomena Report, we will have two webinars on the report data:

Wednesday, February 20: 10am Eastern Time (For Americas and Europe)

The full report is now available on www.sandvine.com/phenomena.