This isn't the first, the second, the third, but actually, Sandvine's fourth blog post on Super Bowl streaming. Each time I've written it, we've looked a the same types of data, and in the six years since we first published our post, I can tell you that not much has changed in how people use the Internet on Super Bowl Sunday.

Once again, we observed the "Super Dip" which shows a modest decline or flattening of Internet traffic during peak period, when it typically should be increasing. The chart below compares traffic from last night, with the previous Sunday and demonstrates a 25% decrease in total Internet traffic on a leading North American fixed operator. 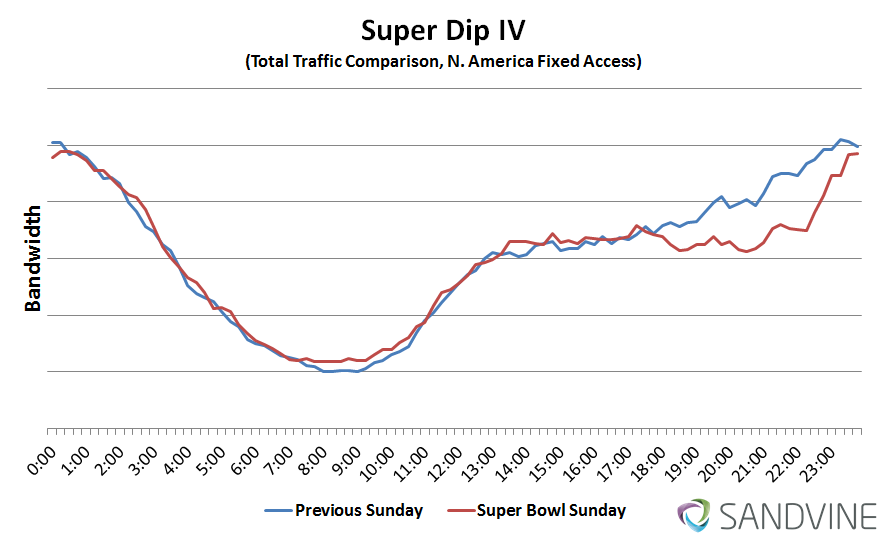 Why do Super Dips occur? It's best to revisit our 2012 post to describe why.

....while there were a significant number of users streaming the game, the vast majority of viewers still went offline and elected to watch it on their big screen TV.

The one key change from five years ago is it is now possible to stream the big game on a number of sources. Sandvine observed traffic spikes on NBC Sports, Hulu, Sling, and the operator’s own streaming service, and when combined these services accounted between 4-7% of total Internet traffic during game time last night.

Of course not everyone watching Sling or Hulu were watching the big game, but it at least provides some insight into what was happening last night.

I'll do some more poking around today, and if I see any interesting data points I'll be sure to post them here. And if I don't, I 'll see you next year for Super Dip V.