I am a big fan of the beautiful game, and it is always interesting to see how an event like the World Cup impacts networks. The FIFA World Cup 2018 is forecast to reach 3.4 billion viewers – half the world population – for the 2018 event. Some countries feel like they have been hit by the zombie apocalypse during the home team’s game, with the streets mostly empty, but the pubs crowded with people. In Mexico during the game against Germany in the first round, Mexico’s goal was reported to have possibly caused an artificial earthquake (news reports vary), but no one can deny the images of the large crowd jumping up and down.

So everyone watching the game on TV is a good thing for network operators, right? It depends if your local team is playing that day…

As part of our European SandBox Live event, Sandvine took a look at the impact on some European countries during their home team’s first round. We focused on two “football mad” countries and mobile networks – which are often the ones turned to when enjoying a live event (outside the streaming aspect of viewership).

In the first football mad country, we took a look at how traffic on a mobile network changed due to the game. This is the network the same day, a week before the game: 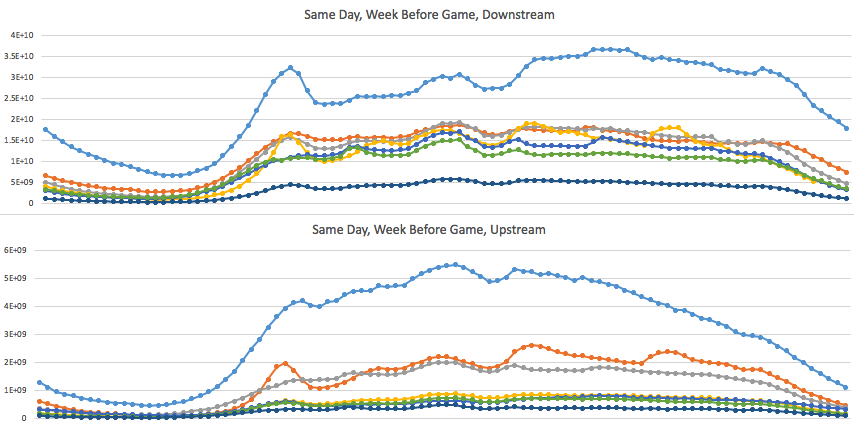 Not even close. On World Cup game day, the video streaming provider’s traffic increases during the early games, but really spikes during the final game – which is the local team. During the game, the game’s streaming bandwidth exceeds YouTube to be the top application on the network. YouTube traffic drops ~30% as the game starts, picks up by 10% during halftime, then loses all of that gain when the game starts up again. During halftime, the video streaming traffic dips and then comes back when the game re-starts. Immediately after the game, Snapchat, Facebook, and Instagram all spike up as people share their feelings on the game.

We also took a look at another mobile network in the same country that is shown below. This network also had high participation in users watching the game on the local streaming rights provider. Both of the peaks are from CDNs that were used to deliver the World Cup game to devices via the streaming service. On this network, the streaming app is far and away the biggest bandwidth usage on the network, and when combined, is 3x all other traffic on the networks. A similar pattern of a halftime dip occurs on this network as the other network.

In a different country for a different game, one mobile operator experienced an 8% overall increase in traffic during the game (again, the earlier game did not have as much impact as the home game).

Digging deeper, HTTP media streaming (live broadcast of the event from the streaming rights holder) increased during the game, and YouTube and Facebook usage decreased. During halftime, however, both YouTube and Facebook spiked as people watched replays and shared their thoughts on the game. The video streaming did not pass YouTube as in the other country, but it increased the overall usage of the network to higher than normal.

The same behavior was exhibited by other social messaging applications like Instagram and WhatsApp, but the difference for those two applications was that the traffic peak was at the end of the game – which was a dramatic ending in this case. Another interesting fact was that FIFA gaming traffic doubled during halftime and was 50% higher after the game than before the game started as gaming fans were inspired by the exciting game (FIFA actually gave a free update to FIFA18 that enabled a World Cup mode).

So if your country’s team is playing in the World Cup – the attention and traffic will only get worse as the tournament goes on! We will continue to share more data as the World Cup progresses – stay tuned.