We live increasingly online lives, and encryption is a crucial and necessary component of our digital existence. Encryption provides security for our data at all times, maintains data integrity, and protects user privacy.

When it comes to internet traffic and encryption, the two terms you'll hear thrown around most often are Secret Socket Layer (SSL) and Transport Layer Security (TLS), and it can get confusing if you aren't an expert. What's the difference between SSL and TLS? Are they the same thing? Which one is better? I’m glad you asked.

SSL and TLS are both cryptographic protocols that provide authentication and data encryption between servers, machines, and applications operating over a network. SSL was developed first, way back in 1995 by Netscape. TLS was designed to be a successor to SSL and replace it, and it made its debut in 1999 and was based on SSL 3.0. Over the years, new versions of the protocols have been released to address vulnerabilities and support stronger, more secure cipher suites and algorithms. SSL 2.0 and 3.0 have long been deprecated by the Internet Engineering Task Force (IETF), and the internet deals almost exclusively with TLS today, with multiple versions having been released over the years.

It's been nearly a decade since TLS 1.2 was released, and it is the encryption protocol of choice for most internet traffic – more than 50% of the encrypted traffic on the internet runs on TLS 1.2. And now, after years of discussions and rework, the TLS 1.3 standard has been finalized as of March 21st, 2018. Last month, the IETF approved version 1.3 of the TLS specification to move to the standards track. 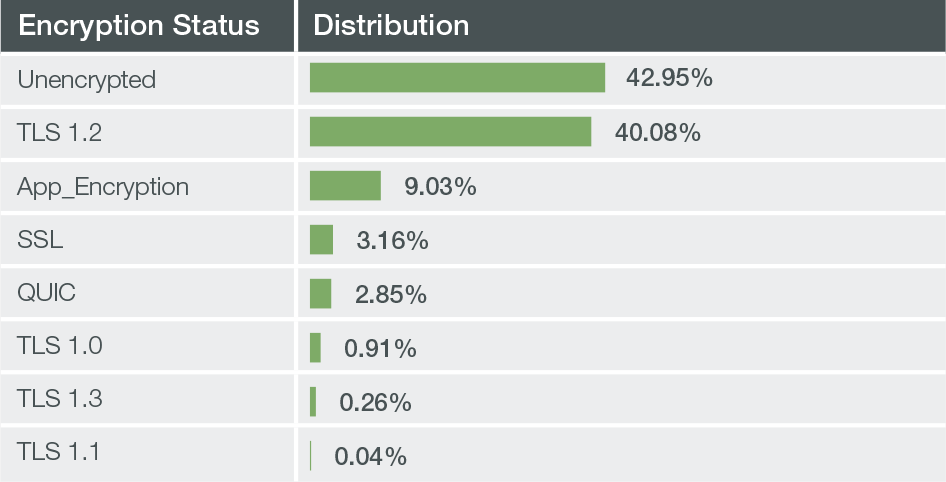 TLS 1.3 has several changes that improve performance and security, while also eliminating several complexities and simplifying the protocol stack. In short, it is a faster, simpler, and more secure alternative to existing TLS protocols. What's not to love?

Here's a quick look at some of the key updates in TLS 1.3 along with their implications:

So how has the industry reception for TLS 1.3 been? Well, Sandvine took a detailed look at the data so far and two things are blindingly obvious:

The statistics also indicate that Google, Twitter, Microsoft, and others have started to experiment with TLS 1.3 as well, and we expect the numbers to rise and TLS 1.3 adoption to really pick up in 2019.

At Sandvine, we pride ourselves on classifying the internet and providing valuable insights to our customers, and TLS 1.3 is a change we welcome with open arms. TLS 1.3 holds no demons for us, as our traffic classification is not impacted by the improvements it brings – and in being faster, simpler, and more secure it benefits the users and the operators.

If you’d like to learn more about how Sandvine continues to thrive in a landscape with increasing encryption and what key use cases we can enable for you, then read our whitepaper “Shine a light on the darkening internet: How to thrive despite Encryption” or visit our website for more details.

Shyam is the Technical Product Manager for Sandvine's Data Management portfolio, which includes traffic classification, business intelligence, and AI-enabled solutions. He comes from an engineering background and enjoys getting his hands dirty with hands-on research into emerging technology, especially those related to data science and the ever-evolving internet. When he's not at work, he's hiking a mountain, reading a book, or kicking a football somewhere (but hopefully not at the same time).