Not an uncommon sentiment these days, as every time Tesla introduces a new model, the wait-lists start to fill up quickly. So naturally, as I started to look through the Phenomena data, when I saw "Tesla" on a few signatures, my interest immediately popped. Sandvine breaks out three different Tesla signatures at the moment:

With Model 3 deliveries ramping up this year, you would expect the amount of traffic Teslas contribute to networks around the world would increase. And logic prevails once again — if you compare January to June (the period of this edition of the Phenomena report), the numbers change quite a bit.

First, some demographics on the worldwide distribution of traffic and connections:

Not surprisingly, the majority of the traffic from Tesla is in the Americas, but it has a worldwide reach. Now for the big question — what happened from January to June? 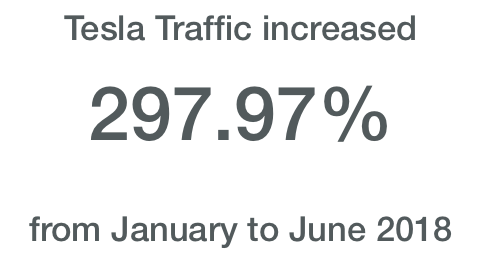 Bingo, hypothesis confirmed by the data. We'll keep an eye on this one, as it is a good example of translating market success to network impact. Interestingly enough, this is not always the case with some Phenomena data, where subscriber numbers do not always translate to usage on the network — this was most apparent in the music streaming analysis of the full report, but you'll have to wait for that!

In the meantime, register for our Global Internet Phenomena webinar on October 2, where you'' receive further insights from data and exclusive access to the report, which will be sent directly to your inbox immediately upon release: