Since our report on the “fully-loaded” Kodi ecosystem, we have been digging deeper into research types of video piracy, and today we released a new report on an emergent form of subscription television piracy that aims to replicate the live television experience offered by cable and satellite providers for approximately $10 USD a month.

Our research reveals that across multiple tier-1 North American fixed access networks, 6.5% of households are communicating with known TV piracy services and these services accounted for more than 6% of downstream traffic in the peak evening hours.

Extending the 6.5% figure introduced previously across the United States and Canada’s fixed access broadband subscriber base (approximately 106 million users) and combining it with the average/typical price of a TV piracy service ($10 USD per month) begins to quantify the true economic impact of this piracy ecosystem: such an exercise indicates that TV piracy could quickly become almost a billion dollar a year industry for pirates.

Our report outlines, how during our investigation into subscription television piracy, we observed four distinct usage trends (premium television, live sports, international channels, and news) tied to the viewing of pirated TV services, which we believe are significant contributors to the growth of these services.

For me, the fact that news channels were among the most viewed was a revelation, but after looking at the shape of the traffic curves for these channels, we observed that the levels remain relatively constant throughout the day. Like all video applications, pirate TV bandwidth peaks in the evening but as shown in the image below, news channel traffic was still significant during the day. 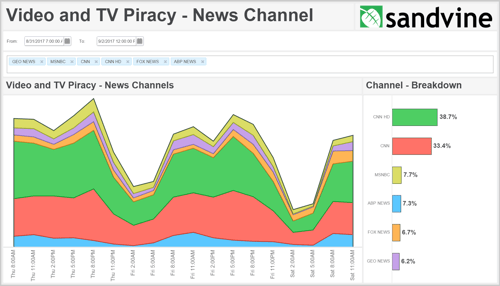 We hypothesize that subscription television services might not be popular in households, but could be common in locations like waiting rooms, office lobbies, or bars where a television is installed to help distract clients while they are waiting for an appointment.

The entire report is jammed with interesting tidbits like that using data collected from multiple fixed access networks in North America and examines the mechanics, economics, and usage drivers of pirated television services. Other highlights from the report include:

If you want to learn more, you should give the report a download today.