Mayweather vs. McGregor: A Technical Knockout for TV Pirates

At Sandvine, we’ve spent much of the summer locked in meeting rooms studying the popularity and prevalence of live TV piracy, sometimes referred to as pirate IPTV.

We weren’t planning on publishing any data on this topic until September, but when we saw the impact to networks of the Mayweather vs. McGregor fight this weekend, we just couldn’t wait to share it!

So what did we see? On one a portion of a tier-1 North American fixed access network with over one hundred thousand households we observed that approximately 8% of subscribers have devices configured to access pirated live TV in their homes. These services are different than what we reported on in our report on the “fully-loaded” Kodi ecosystem which focuses on Video on-demand (VoD) content. Pirated Live TV is designed and marketed to subscribers as a replacement for their live licensed television service.

From our previous/ongoing research, on pirated live TV services no single channel accounts for more than 5% of total bandwidth at any given time. On Saturday that all changed, as the report below shows: at its peak, the pirated UFC and PPV channels for the  Mayweather/McGregor fight accounted for 50% of all pirate TV streams. 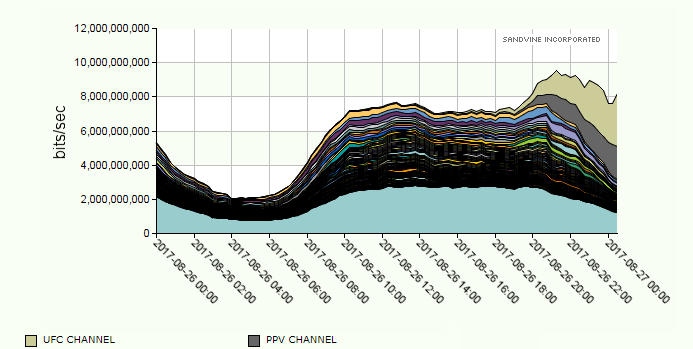 But what does that mean in terms of number of viewers? The bitrates for these pirate TV streams varies between service, but a typical stream is between 3000 and 4000 kbps. If we extrapolate the bandwidth observed from those pirate TV channels known to be streaming the fight, using the chart below Sandvine estimates that approximately 1% of all households* on this portion of the network were pirating the boxing match on Saturday. 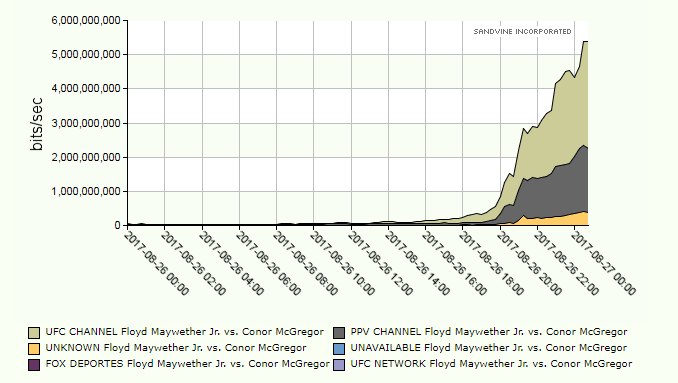 Bandwidth to pirate TV channels airing the match peaked at 1:00am as the fight ended

If you factor in that the fight was $99.95 to purchase on pay-per-view, that means that communications service providers and the promoters were defrauded of hundreds of thousands of dollars  from this sample of households**.

*The market we studied is a major North American city, and our preliminary research shows these services are more popular in urban and multicultural areas. So while we don’t believe that the 0.9% figure is indicative of North America as a whole, it is nevertheless a useful figure for thought exercises about the risks these services pose to licensing business models.

**Yes, we know that only a small percentage of people who bootlegged the boxing match would have actually paid full price for it. Again though, as a thought exercise, we are just trying to demonstrate how much revenue these pirate TV services could cost television rights holders. If you were to extrapolate the 1% of users to all broadband households in the United States, it means up to one million people and $100 million dollars went missing from the pcokets of the boxing promoters last night, and with these services only growing in popularity, they could pose a serious threat to PPV events in the future.

Even as a share of total traffic, the pirated boxing match made a dent. At the conclusion of the fight, pirated streams accounted for 3.5% of total network traffic, and throughout even while the undercard was being broadcast, the boxing pirate streams generated more traffic than Twitch, Facebook, and Instagram.