The past few years we have published a Global Internet Phenomena Spotlight on Encryption. This data has helped to inform our customers about how a significant number of major Internet services and applications have begun to encrypt their traffic to ensure their users’ content remains private.

I wasn’t planning on publishing a third version because I think the past two reports have clearly demonstrated encryption’s momentum has across the Internet, but at the request of a few customers, I pulled together data from one North American site to share on this blog.

In our reports, North American fixed networks have always had the lowest share of encrypted traffic globally, thanks to the popularity of streaming video applications which have typically (other than YouTube) not been encrypted. 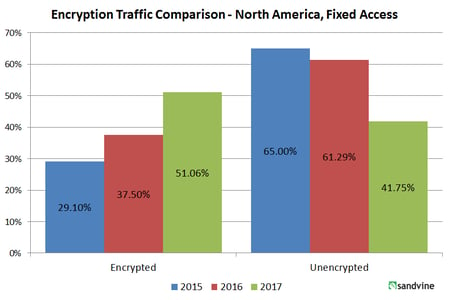 The chart above shows that majority of North American fixed access traffic is now encrypted. This marks both a significant milestone as well as a significant increase over the 29% we reported just over two years ago.

But what of our prediction from last year that said some markets would see 80% encryption in 2017? One word: Netflix.

Netflix, the leading source (35%) of North American traffic has only begun to transition towards delivering encrypted video in select web browsers, consoles, and other devices. First announced over two years ago, this transition towards encryption has been slow, with the vast majority of their traffic remaining unencrypted today.

When Netflix, completes their transition to being fully encrypted, Sandvine’s data shows that over 80% of North American traffic on fixed access networks will be encrypted.

A quick aside, if you work for a communications service provider (CSP) and are concerned about measuring encrypted Netflix QoE, check this out.

That 80% figure is one we still expect to see in many international markets this year, where Netflix has been a much lower proportion of traffic. Our 2016 figures demonstrated that networks in Europe and Latin America routinely had over 65% of their traffic encrypted, and with the organic growth of encrypted traffic in general, we think our prediction will hold true.

So stay tuned to this blog, I hope to be able to post something here soon that proves my predictions right in the next few weeks.