This isn't the first, the second, but actually, Sandvine's third blog post on Super Bowl streaming.

Each time I've written it, we've looked at the same types of data, and in the five years since we first published our post, I can tell you that not much has changed in how people use the Internet on Super Bowl Sunday.

Once again, we observed the "Super Dip" which shows a modest decline or flattening of Internet traffic during peak period, when it typically should be increasing. The red line in the chart below shows my estimate of an approximate growth trajectory you would see on a typical day. 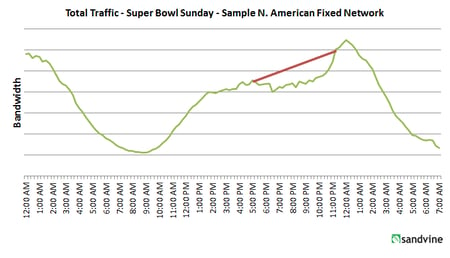 Why do Super Dips occur? It's best to revisit our 2012 post to describe why.

....while there were a significant number of users streaming the game, the vast majority of viewers still went offline and elected to watch it on their big screen TV.  In fact so many subscribers did this, the Super Bowl actually created a “Super Dip” in Internet traffic.

So just how much network traffic did the big game account for? This year Fox aired and streamed the game, and no login credentials were required to watch it over the Internet. This resulted in traffic accounting for 6% of total network traffic around the half-time show, and then spiking back above 4% as the Patriots made their comeback in the fourth quarter and overtime.

The only two applications to generate more traffic than the Super Bowl when it was being played were Netflix and YouTube. 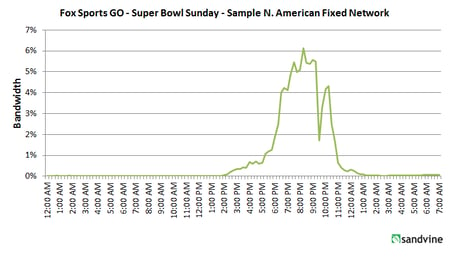 And finally, we decided to take a look at messaging apps to see when traffic spiked during the game. The chart below shows WhatsApp traffic and demonstrates that the most chatter happens right at kick-off. I'll leave it up to the readers to guess as to why this is the case, but if I were to guess it would some combination of people telling their friends they are running late for a party and arguing over what pizza toppings to order. 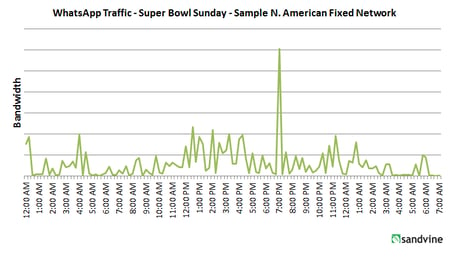