US Election 2016: TV Trumps the Internet

So there was an election in the US last night, and I’ve already gotten a few calls from people wondering what impact it may have had on the Internet.

Below are some of my preliminary findings from a sample US fixed access network (on the east coast), that in the past has been fairly representative of national traffic

Comparing traffic levels to the peak period of Sunday and Monday, Tuesday evening saw traffic dip by roughly 15%. This was likely caused by people choosing to watch the election results instead of surfing the web. 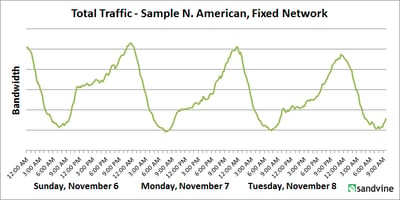 With total traffic down, so was the largest source of traffic in North America. Instead of using their big screen TVs to watch Stranger Things on Netflix, subscribers may have been glued to the strange things being shown in the news coverage. As a result, Netflix saw their traffic levels decline 25% when compared to the previous day, and Sandvine fully expects that traffic to return to normal levels tonight. 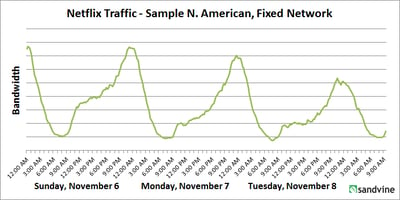 While watching the election results on their TVs, subscribers were also glued to the smartphones, tablets, and laptops inside their homes to either follow the results or share their thoughts on what was happening

Compared to their typical evening levels, Facebook saw an increase of almost 30% and Twitter  traffic more than doubled on election night. 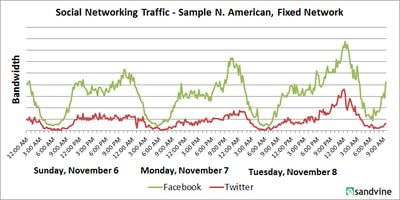 I'll keep poking around today, and if I find anything else of interest, I'll update this blog post.