Good news: The Olympics are back!

Bad news: Primetime television ratings are down 32% compared to the last summer Olympics! so does that mean viewers are turning to streaming?

Early numbers from NBC in the US say Saturday was the best day ever for the NBC Olympics digital platforms, with 155 million live streaming minutes being served. Those figures are up 263% from the comparable day in 2012, with the number of unique users only up slightly to 11.3 million (7%).

But what impact does that reported increase have on network operators? We captured data from a single sample US network over the weekend and it showed that throughout the day and during prime time hours, Olympic streaming traffic accounted for roughly 1.5% of traffic, with the opening ceremonies on Friday accounting for just 0.6%.

Now to be clear, and hedge my proclamations a bit, the opening weekend of the games isn't filled with marquee events which drive traffic and I still wouldn't be surprised to see an event like the men's 100m final featuring Usain bolt, or a gold medal basketball game to have a more material impact on network traffic. 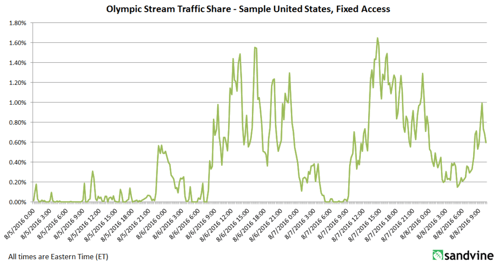 So with such explosive growth in viewing minutes claimed, why isn't Olympic streaming taking up more bandwidth? The answer is simple. The Internet has grown at a faster rate over that time.

Want proof? Take a look at the three leading video providers (Netflix, YouTube, Amazon) on the same network. Notice anything? All figures are broadly in line with what we reported on in our Global Internet Phenomena Report in June. These three services now dominate so much bandwidth and time from subscribers, only a Super Bowl-like event has the ability to have a material impact on modern networks. 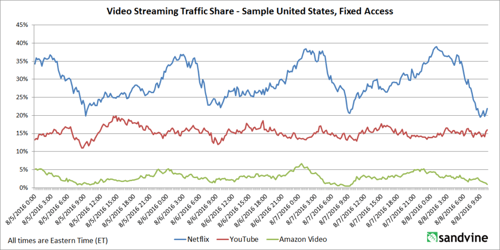 So if there is no earth shattering news caused by Olympic streaming, I did find one thing very interesting, and that was the comparative performance of Twitch.

For those unfamilar, Twitch is an eSports streaming platform which allows people to watch other people play videogames. Over the weekend, on this one network,  it looks like the eSports bandwidth beat out the Olympic sports bandwidth, with Twitch generating more total traffic during the prime time hours. The only time where Olympic streaming significant outpaced Twitch was for the brief period Sunday night surrounding men's 4x100m freestyle swimming final where the United States won gold. 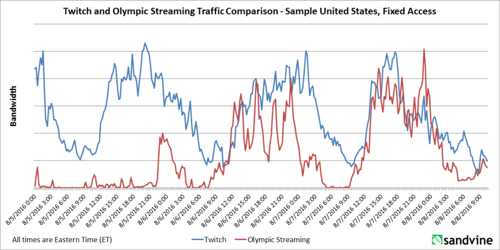 eSports beating real sports? If the IOC wants to improve TV ratings, maybe it's time to have League of Legends as a demonstration sport in 2020.

We'll be back later this week with more Rio 2016 data, so be sure to check back.