Earlier this week, we published some preliminary data on Olympic streaming in the US.

The highlights of that data was:

Even though Olympic streaming isn't dominating IP networks, NBC is still seeing record streaming viewership, which got us wondering just how people are watching.

Below is a chart that shows the top devices used to stream the Olympics last night (August 10) on one US fixed access network. 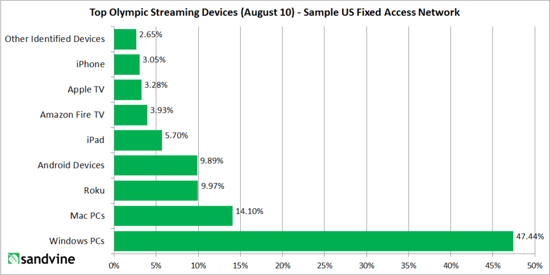 The data shows that PCs are dominating Olympic streaming like Katie Ledecky in the pool, with Windows and Mac PCs accounting for over 60% of total traffic.

After PCs, mobile devices, and set-top boxes handle the remaining share. Looking at mobile devices, which for the purposes of this post we'll count as Android Devices, iPads, and iPhones, accounted for 18.6% of Olympic traffic, with Android and iOS (iPad and iPhone) operating systems being roughly equal.

The remaining 2.7% listed as "other identified devices includes a number of devices such as iPod Touches, Chromecasts, and XBox Ones which all support NBC's Olympic streaming application, but accounted for a small amount of traffic on their own.

Now that we have talked devices, be sure to check back next week, as I'm sure we'll have more interesting insights on the Olympics in Rio.