I’ve talked on this blog before, about how I am a relatively/very huge Toronto Blue Jays fan, and it turns Canadians across the country are jumping on the bandwagon with me.

Yesterday’s ALDS Game 5 between the Texas Rangers and the Toronto Blue Jays was an intense game with a 7th inning that was pretty freaking intense.  Not only was the game crazy, it also had a pretty significant impact (or maybe lack thereof) on the Internet.

So what happened? Data from one fixed operator in Ontario, Canada showed an almost 20% decline in Internet traffic over the previous day when looking at the 4pm to 8pm window when the game occurred. 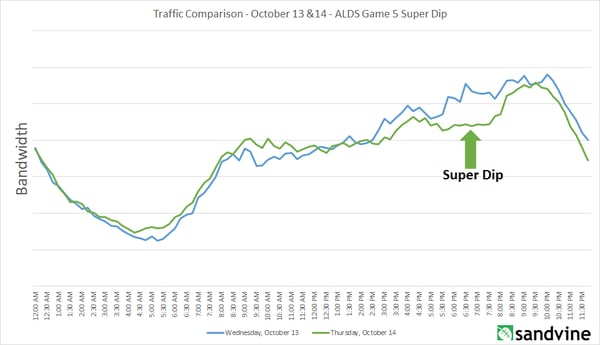 Why the decline? We covered this topic before when observing the Super Bowl. Dubbed by Sandvine as the Super Dip, it occurs when a television event is so engrossing, people put off their devices and watch the game on television.

Sportsnet, the television channel who broadcast the games, reported that game 4 of the series saw an average of 4.4 million viewers, with 9.5 million Canadian watching a portion of the game. For a nation of 35 million people, that is pretty impressive and Game 5 ratings have yet to be released.

But what about cord cutters? Or those who prefer to stream? We observed that at game time Real Time Messaging Protocol (RTMP) traffic spiked from 1% of traffic to 6% of traffic and then immediately dropped off. RTMP is used to stream audio and video over the Internet and this traffic is indicative of subscribers likely using bootleg/grey market streams to watch the game. For comparison MLB.TV and SportsnetNOW, services that offer legal ways to stream the game when the appropriate credentials are provided accounted for approximately 1% of traffic each.

Now this is normally where I would put a closing paragraph talking about how we will continue to observe traffic as the Blue Jays progress through the playoffs. I'll save those words for my next post, and leave you with a much more fitting way to end this blog.....a bat flip.