Twitch, a service that allows subscribers to watch eSports online is a topic we have covered previously. In May of 2014, we revealed that the service was generating more traffic than HBOGO in the United States and shortly after that news was released Amazon purchased the service for a rumored $1B.

Eighteen months later, while I have yet to receive my finder’s fee from Amazon for the acquisition, Twitch continues to make waves on North America networks.

So what impact did these events have? As seen in the chart below, on one east coast North American network Twitch saw a 50% increase in traffic over its average daily peak levels. 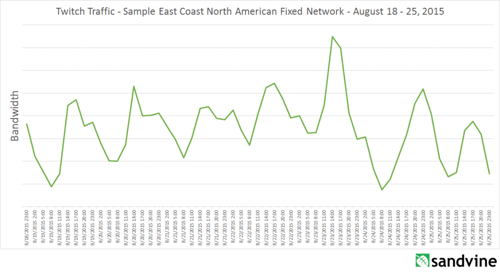 Twitch, like most streaming applications typically has traffic peaks in the evening hours. In this case however, due to some of the events taking place in Europe and the time shifting required to watch on the east coast, Twitch reached its peak during the late morning/early afternoon and accounted for over 4% of total network traffic at the time.

eSports viewing continues to gain momentum, and just today it is expected Google will launch a service that competes with Twitch called YouTube Gaming. We will continue to actively track the eSports space and will provide updates in the near future on how the new entrant fairs against the current leader in eSports streaming.