Windows 10 Did Not Break The Internet.

I like snarky blog titles, I also like Dan Rayburn who blogs at streamingmediablog.com. Earlier this week, he published a story on his site entitled “Windows 10 Launch Could Seriously Break The Internet, Could Peak At 40Tb/s”.

When such a bold proclamation/prediction is made I think it at the very least warrants some investigation. So I put up the bat signal and reached out to customers around the world to share preliminary data to see what type of impact the launch has had.

The early results? Windows Insiders are excited. The general public maybe not so much….but there’s a reason for that.

Below you will see two charts from a North American fixed network, although the data I've seen is almost identical worlwide. The first shows the total amount of traffic generated by Windows Update.

Windows Insiders, those who were beta testing the software, were given access to the software a day early on July 28. You can see that at midnight a number of them hit refresh and downloaded the release version of the software. The traffic level then decreased in the wee hours of the day and then rose and fell throughout Tuesday.

On Wednesday, July 29, launch day for the general public, you can see there is no midnight spike and in fact Windows Update traffic is half that of what was observed on the previous day. 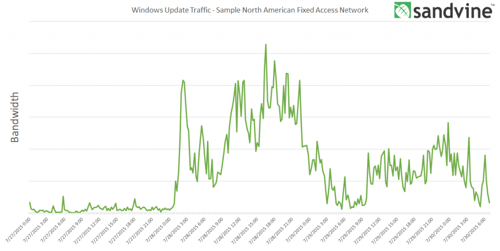 As for share of traffic, the chart below shows Windows Insiders drove it to account for between 6-8% of traffic during peak. However on Wednesday when it was available to the general public it account for only 3-4% of traffic.

So why didn’t it break the internet? Was it lack of enthusiasm? Nope. The lack of Internet breakage is the result of Microsoft rolling out the release in waves. Subscribers have to reserve a copy and it is rolled out to them in batches at the discretion of Microsoft.....although there may be some ways to skip the line. Android OS releases also employ a similar phased release system. But know who doesn't do controlled release? Apple. Two years ago the Apple’s iOS 7 update accounted for over 15% of peak period traffic on the day it was released. That type of release can and does put tremendous amount of pressure on networks which can make the experience frustrating for subscribers and stressful for network operators.

Microsoft should really be applauded for their phased Windows 10 roll out. While it may leave some people waiting for an update, the largest digital software release in history has had no significant impact on network experience which is kind of incredible if you think about it.

We’ll continue to track Windows 10, so if any new or more interesting data comes out in the next few days we’ll post it here.