Just a month ago, we published a Phenomena Spotlight on Encryption, but today we are back again with the first of three traditional Global Internet Phenomena Reports, Sandvine will issue in 2015.

A quick note for loyal readers: For 2015, Sandvine is changing the structure of the Global Internet Phenomena Reports in order to provide more granular detail on Internet usage around the world. Sandvine will issue three publications of the report, each focusing on distinct regions, allowing for a deeper exploration of the unique traits of markets across the globe.

In this latest edition, we took a deep dive into networks in both Latin America and North America to examine the latest facts, fads and future trends on the Internet.

So whats our biggest takeaway? In a word: Concentration 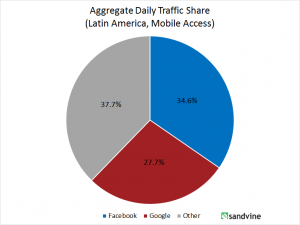 This concentration of Internet traffic among a handful of companies could have a serious impact on the Internet because corporate decisions by these major players, like Netflix’s recent decision to encrypt their streams or Facebook’s decision to auto-play videos uploaded to its site, can instantly and dramatically impact subscribers and all Internet access networks.

The report also explores a number of other trends, the highlights of which include:

I will bring some more insight from our latest report in coming weeks, but in the mean time I suggest you just download a copy of the Global Internet Phenomena Report: Latin America & North America for yourself.