There is a growing trend on the Internet, with more and more applications beginning to encrypt their traffic in order to protect a subscriber’s content from prying eyes.

Sandvine believes that encrypting traffic to protect subscriber privacy is a good thing, and while there has been a lot of talk on how information on the Internet can be hidden or guarded, there is still a great deal of misunderstanding on the topic.

This morning we released our latest Global Internet Phenomena Spotlight on the topic of Encrypted Internet Traffic with the hopes of using real network data to shine a spotlight on just how much Internet traffic is currently encrypted.

In the paper, Sandvine uses data collected for a live, representative network in North America to explain the current state of traffic encryption, where it is going, as well as provide a high level overview of the technical terms and technology associated with encrypted Internet traffic.

Some notable points from the research include: 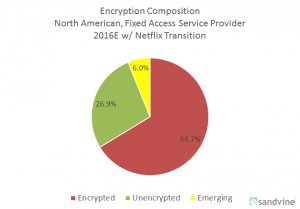 If you want to learn more on this subject, the Global Internet Phenomena Spotlight on encrypted Internet traffic, as well as a technology showcase examining Sandvine’s Internet traffic classification techniques can be downloaded from the “Encryption Trends” page on Sandvine.com.